Get the lowdown on everything Belmont by listening to “Off To The Races”, a radio show broadcast in Richmond on ESPN 950-AM and 100.5 FM—and streamed live at www.espn950am.com— Saturday morning from 9:30 – 11:00 AM. Host Nick Hahn of  Racing Biz Radio will preview all aspects of the big card in New York, and “Derby” Bill Watson will give his selections and review the field horse by horse — all 13 of them.

Virginia residents can wager the action via one of three partner on line betting companies — either www.TVG.com, www.XPressBet.com or www.TwinSpires.com. If you open a new betting account on Belmont week, all three companies have great bonus offers.

Here is an article from www.bloodhorse.com on trainer Todd Pletcher’s chances Saturday!

Trainer Todd Pletcher will seek his third Belmont Stakes (gr. I) victory when he sends out Destin and Stradivari, who each showed just enough in their initial classic races to suggest a top effort could be in the cards.

A victory June 11 at Belmont Park would make Pletcher the 13th trainer to win the 1 1/2-mile classic at least three times, as he sent out 2007 winner Rags to Riches and 2013 victor Palace Malice  .

“As a whole, I think a lot of the Giant’s Causeways improve as they get older,” Pletcher said. “In his case, not only will he continue to physically develop, but mentally he’s starting to get more professional. I think from all aspects he will improve as he gets older. He’s shown a lot early.”

Destin then started in the Kentucky Derby Presented by Yum! Brands (gr. I) off an eight-week break. In that race he made a middle move into fourth but finished sixth.

“He’s the kind of horse that wears the blinkers for a reason,” Pletcher said. “He looks around a lot—sees everything.”

Both of Pletcher’s previous Belmont winners entered the race off about a five-week break, as Palace Malice finished 12th in the Derby before winning the Belmont, while Rags to Riches won the Kentucky Oaks (gr. I), was off five weeks and a day, then won the Belmont.

Pletcher will take a different approach with John Gunther, Michael Tabor, Derrick Smith, and Susan Magnier’s Stradivari, who enters the Belmont off a fourth-place finish in the Preakness Stakes (gr. I) in his classic debut. Pletcher said he’s comfortable with the timing of the race, even though his hand was forced a bit when Stradivari didn’t make his seasonal debut until April 17, scoring a 14 1/2-length victory in a Keeneland allowance that day.

“We always knew he wasn’t going to make the Derby, but once he won the Keeneland allowance race by as impressive a margin as he did, the Preakness kind of got on the radar screen,” Pletcher said of the Medaglia d’Oro   colt who made his stakes debut in the Baltimore classic. “I thought he ran a very credible race in the Preakness for his first start in a stakes. Three weeks was the only option if we wanted to take another crack at a classic.”

John Velazquez, who guided Tabor and Smith’s Rags to Riches to victory in the 2007 Belmont and also won the classic in 2012 with Union Rags  , will be aboard Stradivari. He said Stradivari picked up some valuable experience in the Preakness.

“He’s a very young horse but he’s a very nice horse. He won a couple of allowance races and then he came back into the Preakness,” Velazquez said, noting that he didn’t break well at Pimlico Race Course and then got aggressive when mud from the sloppy track hit him in the face. “All I want him to do is relax. He’s better when he relaxes. He can get that high cruising speed going and continue doing that. I think he’ll run better.” 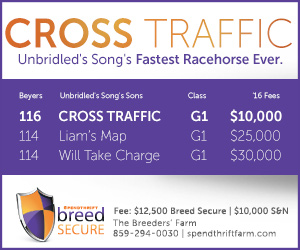 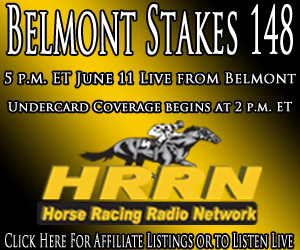 Don’t miss a minute! Get 8 FREE trial issues of The Blood-Horse! Click here to learn more.