The following appeared in www.bloodhorse.com. The Off Track Betting Centers in Richmond — at Breakers Sports Grille and at Ponies & Pints — will show Gulfstream again beginning Saturday.

It didn’t match the wind speeds generated by Hurricane Irma but Florida horsemen released a collective sigh of relief Sept. 11, as initial reports suggested the industry had dodged a bullet.

While some communications were hampered by phone and power outages, representatives of horsemen’s groups, tracks, and training centers from South Florida to Ocala Monday morning said there were no initial reports of human or equine injuries because of the storm.

Barns, track surfaces, and frontside facilities all held up well at tracks and training centers. Some barns at Gulfstream Park saw shingle damage, but the facility and track surfaces were in good enough shape that the track plans to resume training Sept. 12, simulcasting Sept. 13, and racing Sept. 16. Some roof damage to barns was reported at Tampa Bay Downs, which currently is not racing; and the Palm Meadows training center saw some tree damage. Barns at Gulfstream Park West also held up well, sustaining some gutter damage. There were also some downed trees.

Trainer Kathleen O’Connell stayed with her horses in a Gulfstream Park West barn through the storm. She said the height of the storm lasted a long time, from early Sunday morning through the entire day.

“The winds were horrific, and they were still bad until 1 a.m. Monday morning,” O’Connell said. “I have a big ice machine here and at the height of the storm the winds moved it about eight inches. There are big oak trees down but all in all, it weathered it pretty good.”

O’Connell said she was confident the barns at Gulfstream Park West were safe, and she wanted to be close to her horses.

“Structurally it’s a very safe building. I weathered Hurricane Andrew here, actually. It seemed to be the best choice: a concrete barn with a flat roof,” O’Connell said. “I wanted to stay here too because my help was in the dorms, which is pretty far away. Most of the time it was too dangerous for anyone to come out and try to help out with giving the horses water and hay. So it was my choice, and I figured it was the safest and best thing to do.” 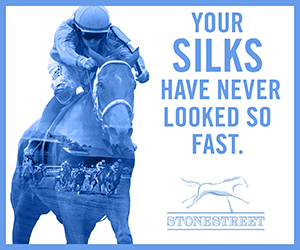 With Hurricane Irma approaching the area, Gulfstream had cancelled its race dates from Sept. 7-10. The track had tentatively looked at racing on Sept. 13 but all racing will be cancelled until Sept. 16. Factoring in the decision on when to return to racing are challenges the region is facing in terms of power outages and clean-up.

“First of all, people and horses are always our first priorities, and everyone is safe,” Campo said. “The horses are all well, and those who work on the backstretch and live in our dormitories are all safe. Over the past two years, we have taken precautions to help our facility by installing a flood retaining wall and pump stations, and they worked. The stables were not flooded.

“Except for some minor damage to roof shingles on our older barns, we’re ready to go. We are waiting until Saturday to resume racing because we have to wait for outside resources and utilities in the South Florida area like power, gas, and clean-up to catch up.”

Bob Jeffries, president of the Tampa Bay Horsemen’s Benevolent and Protective Association, said the Tampa Bay Downs backstretch saw some damaged roofs that didn’t appear to be major. He said the track property saw a number of downed trees. As Tampa Bay is dark, no horses were at the track.

Florida Thoroughbred Breeders’ and Owners’ Association CEO Lonny Powell said Monday morning that he’d heard of no injured horses or horsemen but did add that the Ocala area faced some communications issues with some phones being out.

O’Connell also feels like Florida dodged a bullet. She was amazed by the size of the storm.

“It could have been so much worse. It was just so big in terms of the area affected,” O’Connell said. “I had friends of mine evacuate Naples for a house I have in the Tampa area and they ended up in the storm’s path there, too. There was no getting away from it.”