Here is a great rundown on the 12 Pegasus starters courtesy of America’s Best Racing. Wagering will be available at all 3 Virginia Bets OTBs — at Ponies & Pints and Breakers Sports Grille in Richmond, and at Buckets Bar & Grill in Chesapeake. Advance betting on Gulfstream’s entire Saturday card will be available all day and evening on Friday. Virginia residents can also bet via four on line partner companies — TVG.com, Xpressbet.com, Twinspires.com and NYRABets.com.

The $16 million Pegasus World Cup on Saturday, Jan. 27, will be the richest race in the history of Thoroughbred racing, topping the $12 million Pegasus purse that set the benchmark last year.

There could be a few late defections and/or additions to the field leading up to the post-position draw, and we will update accordingly with the latest information. Keep reading for the scoop on the 2018 Pegasus World Cup probable contenders (with another possible entrant at the bottom): 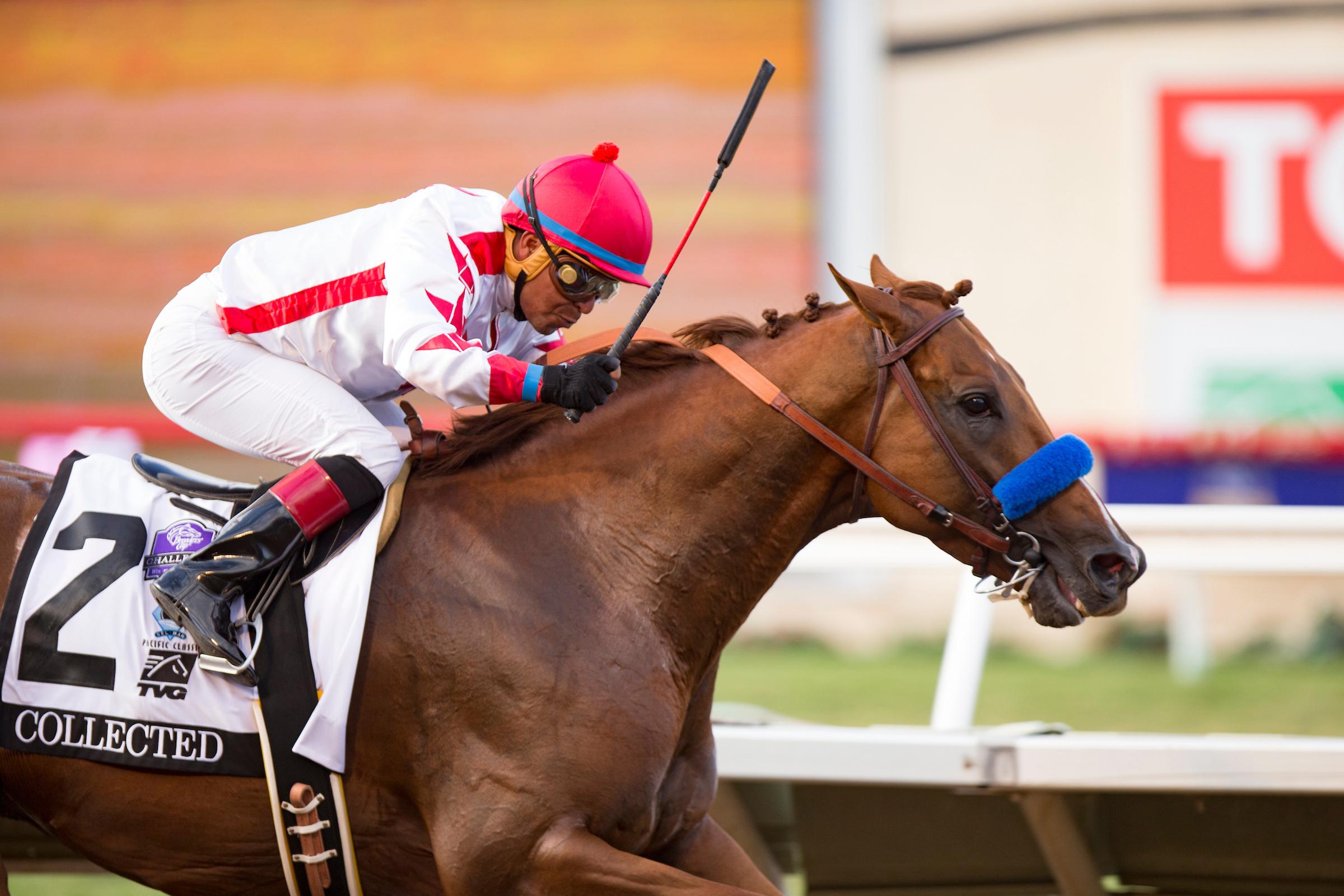 Notable achievements and interesting facts: Collected entered the 2017 Breeders’ Cup Classic a perfect 7-for-7 in races held on fast dirt tracks and ran gamely to finish second to Pegasus rival Gun Runner. His subsequent third-place finish as the 3-10 favorite in the Grade 2 San Antonio Stakes was a real head-scratcher though, and his 20-point drop to a 107 from the 127 Equibase Speed Figure he earned at the Breeders’ Cup is a concern. Before the San Antonio, he had posted 128/128/127 speed figures in three starts. He will need to get back to that level to win the Pegasus. Trainer Bob Baffert and jockey Mike Smith teamed to win the inaugural Pegasus last year with Arrogate, a horse Collected later defeated in the TVG Pacific Classic. 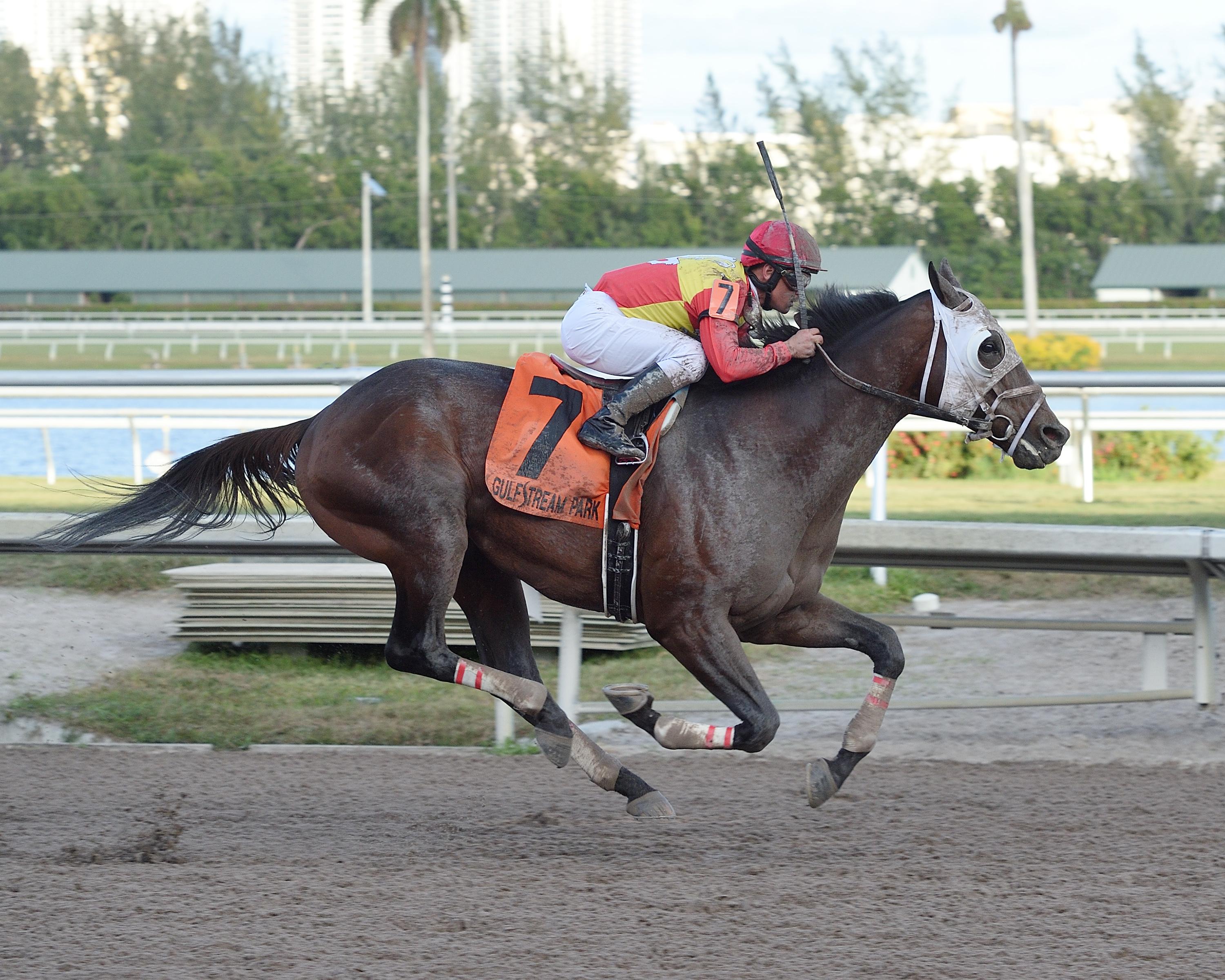 Pedigree: Cowboy Cal – Whom Shall I Fear, by Soto

Notable achievements and interesting facts: Fear the Cowboy enters off a career-best performance in the Grade 3 Harlan’s Holiday Stakes at Gulfstream, where he rallied for a 2 ¼-length win that earned him a new best 115 Equibase Speed Figure. This is a major step up in class for Fear the Cowboy, who has never raced in a Grade 2 race, much less a $16 million Grade 1 against four 2017 Eclipse Awards finalists: Gun Runner, Collected, West Coast, Stellar Wind. On the plus side, he does appear to love the Gulfstream main track with four wins in seven starts, including victories in his last three Gulfstream starts by open lengths. 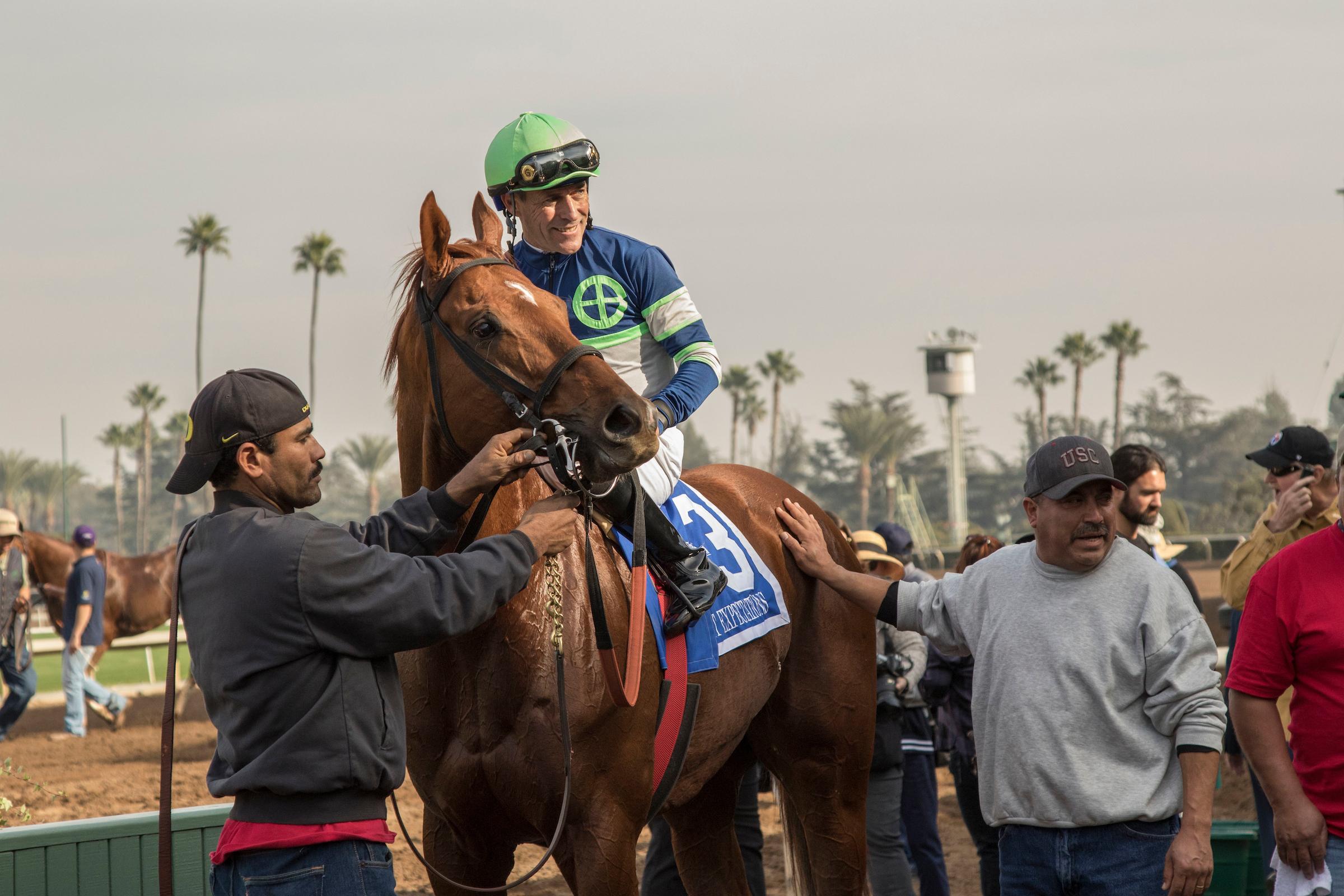 Pedigree: Frost Giant – Sarahisittrue, by Is It True

Notable achievements and interesting facts: Giant Expectations really found his groove in the second half of 2017, winning the Grade 2 Pat O’Brien Stakes, finishing sixth in the Las Vegas Breeders’ Cup Dirt Mile, and then winning the Grade 2 San Antonio Stakes to close the year. He defeated Breeders’ Cup Classic runner-up Collected in the San Antonio and won for the first time going around two turns. He’s definitely a horse on the rise, but stretching out even farther against this level of competition could be stretching it. He’s definitely worthy of consideration for the top three with Hall of Famer Gary Stevens scheduled to ride. 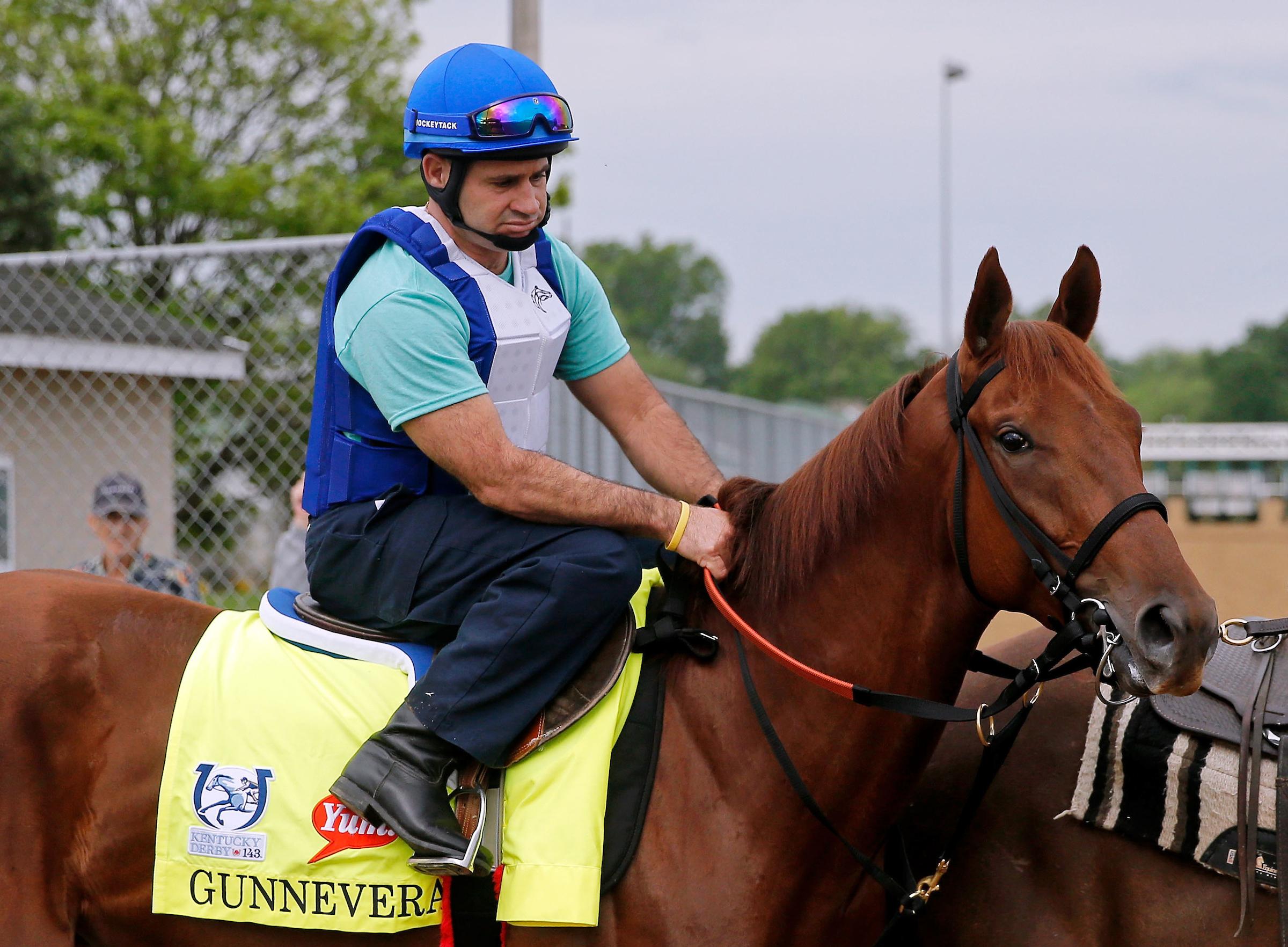 Notable achievements and interesting facts: Gunnevera earned a new career-best 121 Equibase Speed Figure when he rallied to finish fifth in the 2017 Breeders’ Cup Classic, 6 ¼ lengths behind Gun Runner. He raced four times in Grade 1s a year ago and posted a second and a third, so he has proved capable against elite competition. The big key for Gunnevera almost certainly will be pace. He’s a deep, deep closer whose chances would be greatly enhanced if several of the top horses engage in a duel up front that leads to really a fast pace. In that scenario, I could see Gunnevera sweeping past rivals in the stretch for a top-three finish. 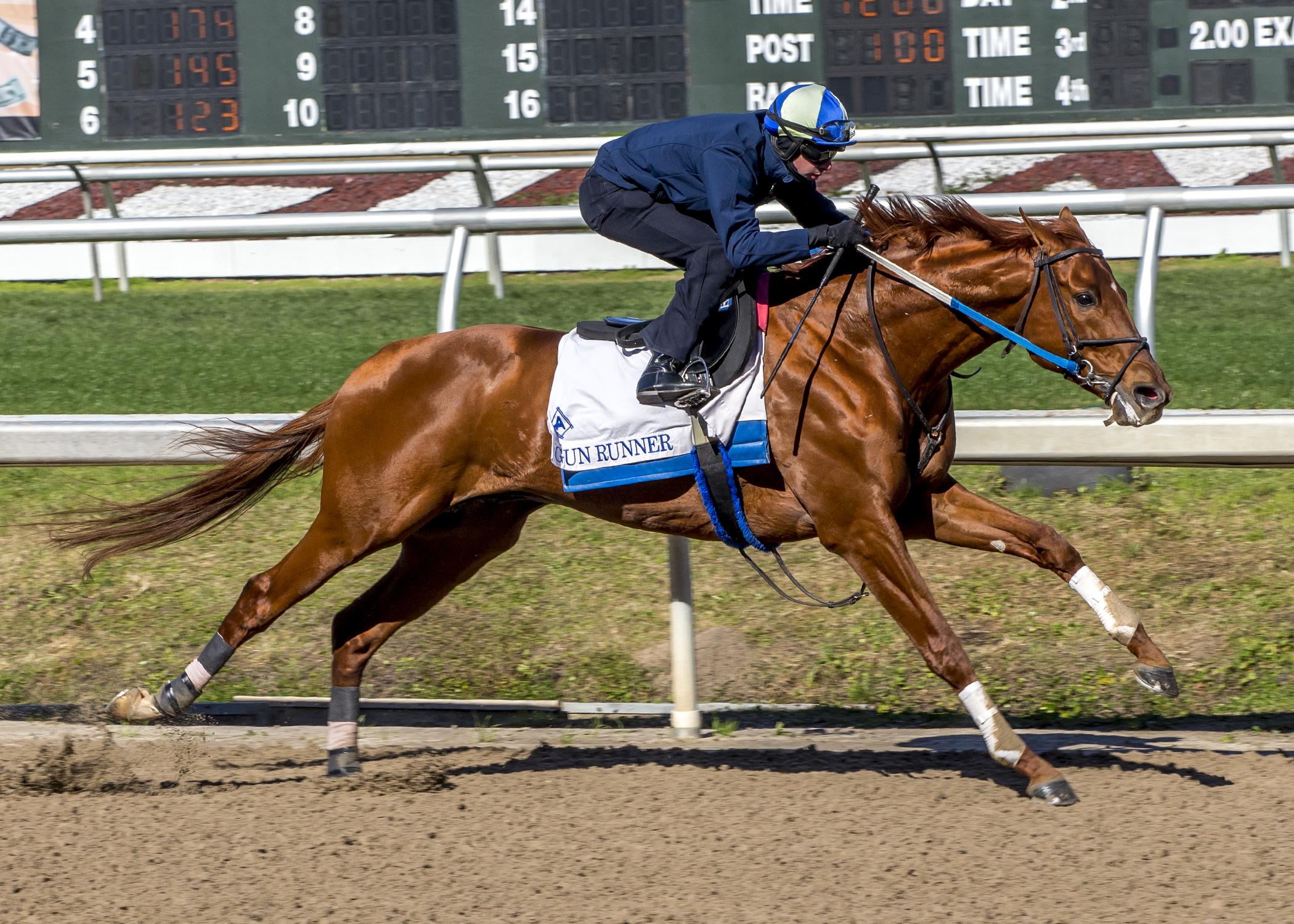 Notable achievements and interesting facts: Gun Runner almost certainly will be named Horse of the Year at the 2017 Eclipse Awards ceremony the week of the Pegasus. He is in impeccable form, having won four straight Grade 1 races by a combined margin of 24 ¾ lengths, most recently winning the Breeders’ Cup Classic by 2 ¼ lengths. His Equibase Speed Figures during the winning streak have ranged from 127 to 132, and he clearly is the best dirt horse in training on the planet right now. Of course, racing fans know very well that doesn’t mean he can’t lose. It just means it will take a Herculean effort to beat him in the final start of his career. 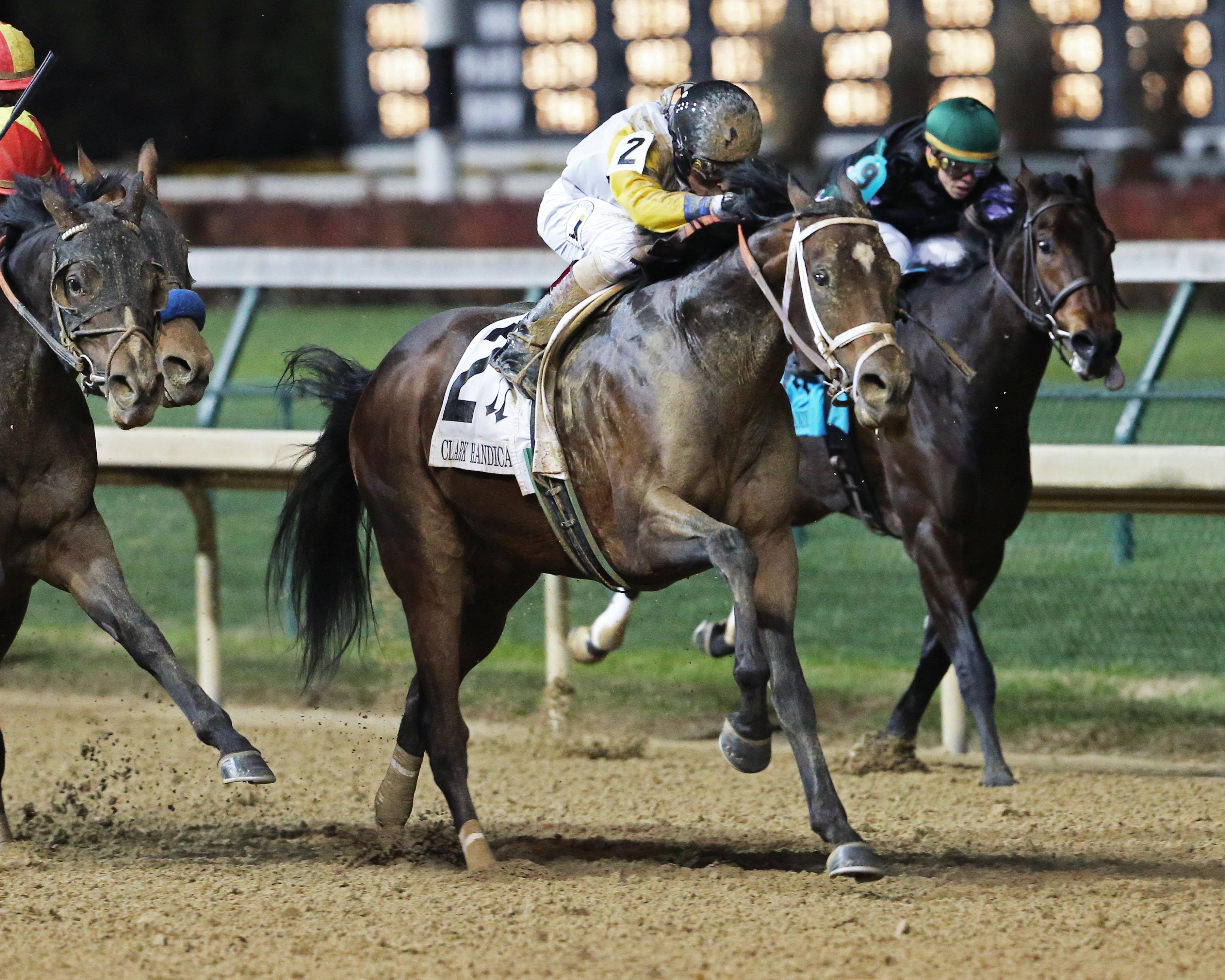 Notable achievements and interesting facts: Seeking the Soul enters the Pegasus off a visually impressive victory coming from off the pace in the Grade 1 Clark Handicap Presented by Norton Healthcare on Nov 24 at Churchill Downs. The Clark was his first career stakes win, but Seeking the Soul has been on the rise. He posted new career-best Equibase Speed Figures in each of his final three starts of 2017, including setting a new track record at Keeneland for 1 1/16 miles in 1:41.36. His third dam (maternal great-grandmother) is 1988 Breeders’ Cup Distaff winner and champion Personal Ensign, whose daughter My Flag won the 1995 Breeders’ Cup Juvenile Fillies. My Flag’s daughter Storm Flag Flying won the 2002 Breeders’ Cup Juvenile Fillies to make it three straight generations of Breeders’ Cup winners. 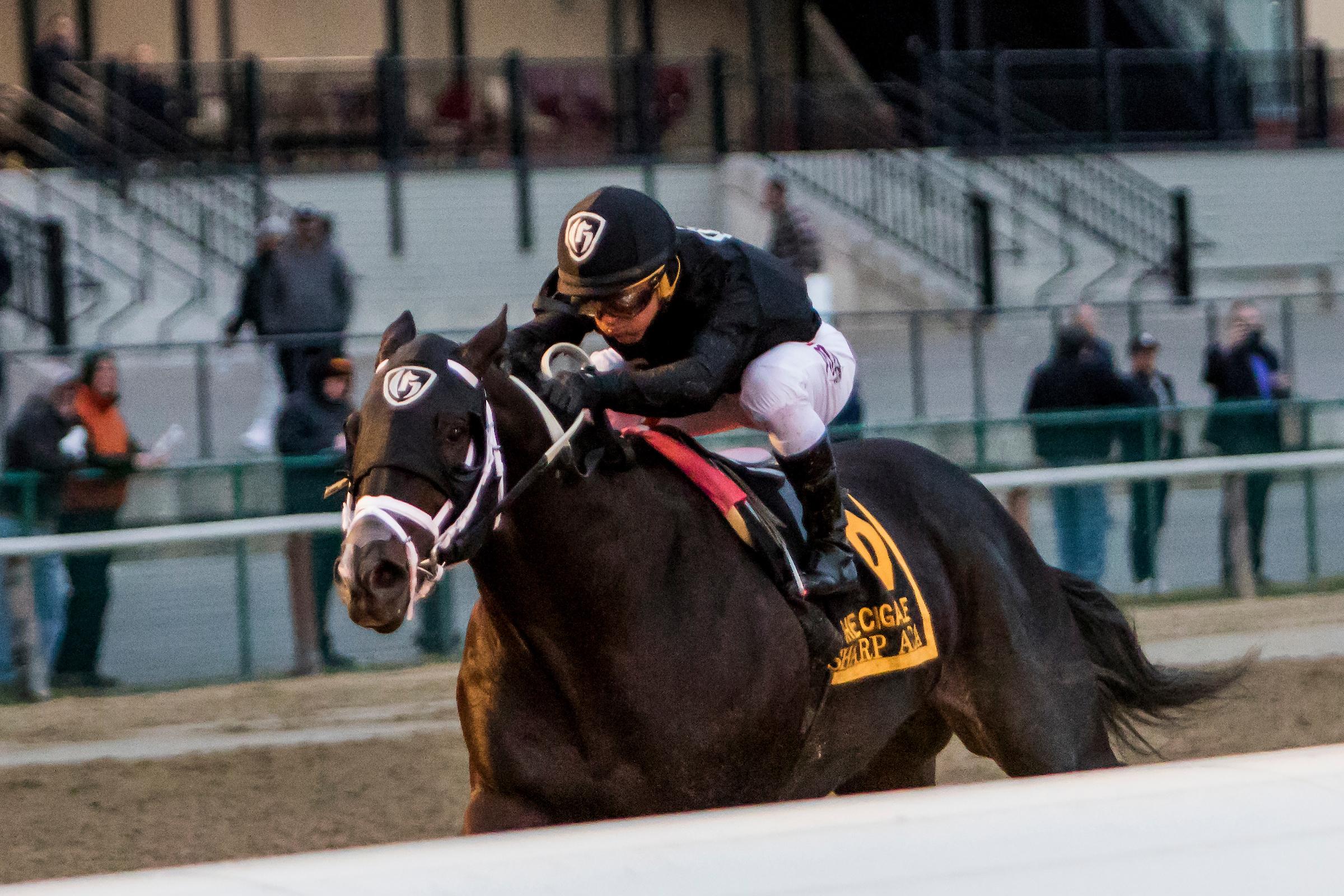 Notable achievements and interesting facts: As far as current form, perhaps only Sharp Azteca is in the same ballpark as Gun Runner. He’s won three of his last four starts, all in graded stakes, with the only loss a runner-up finish by a half-length in the Las Vegas Breeders’ Cup Dirt Mile. He earned a career-best 132 Equibase Speed Figure for the Dirt Mile and followed with a 5 ¼-length runaway win in the Grade 1 Cigar Mile Handicap Presented by NYRA Bets. In his last 10 races, Sharp Azteca has not finished outside the top three and has won five times. Distance is probably the key question, as Sharp Azteca has never competed in a race longer than 1 1/16 miles. 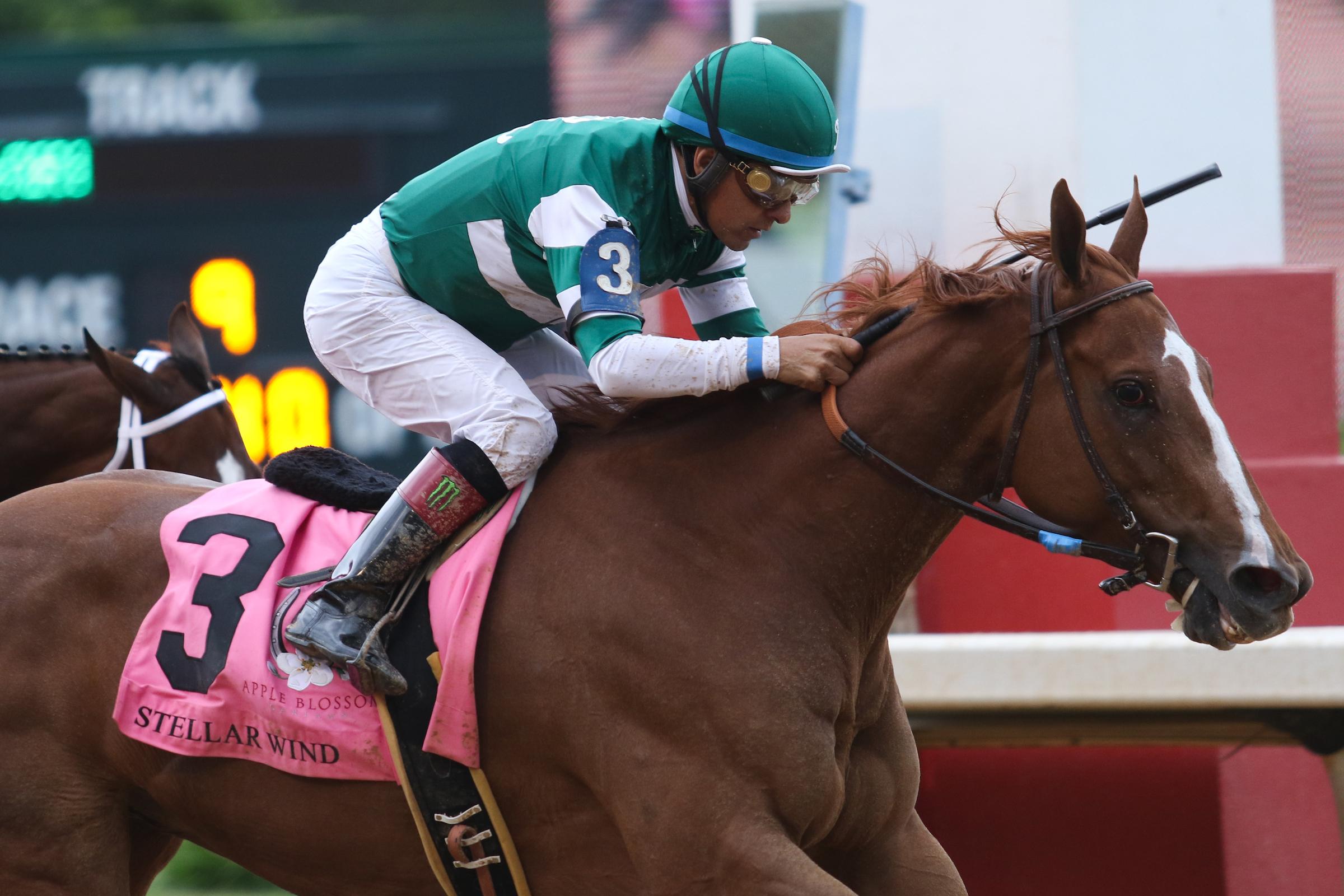 Notable achievements and interesting facts: The only female among the probable starters, Stellar Wind will make her first start for new trainer Chad Brown after she was purchased by her current owners for $6 million at the 2017 Keeneland November breeding stock sale. The 2015 champion 3-year-old filly had an incredible run from December 2014 through July 2017 in which she won 10 of 14 starts, including six Grade 1s. The ultra-consistent racemare enters off arguably the worst race of her career when eighth in the Longines Breeders’ Cup Distaff on Nov. 3, but she has been training well for her return and is a threat for a top-three finish at her best. 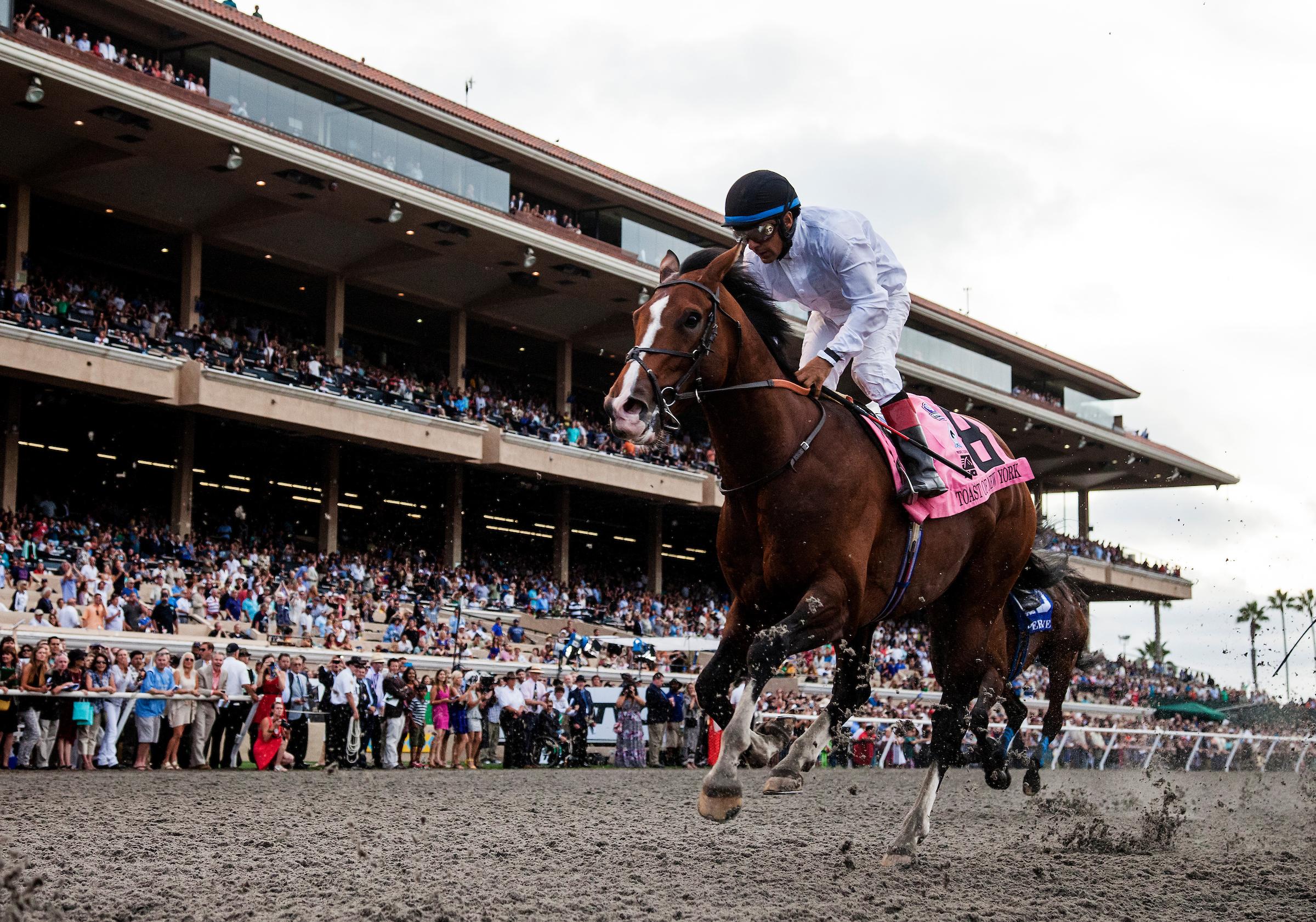 Notable achievements and interesting facts: The wild card of this group, Toast of New York came out of retirement to win a 1 ¼-mile conditions race on the synthetic surface at Lingfield Park in England on Dec. 6. The one-length win came after more than three years on the sidelines following his retirement after running second to Bayern in the 2014 Breeders’ Cup Classic. That was his only start to date on a dirt main track — his other eight races came on either turf or synthetic surfaces — but he won the Grade 2 United Arab Emirates Derby in 2014 on the synthetic main track at Meydan and also finished second to champion Shared Belief that year in the TVG Pacific Classic when Del Mar had a synthetic surface. He’s definitely talented and proven against elite competition, but it’s tough to trust a racehorse who spent a few years living the relaxing life of a stallion against a field with the likes of Gun Runner, Collected, and West Coast. 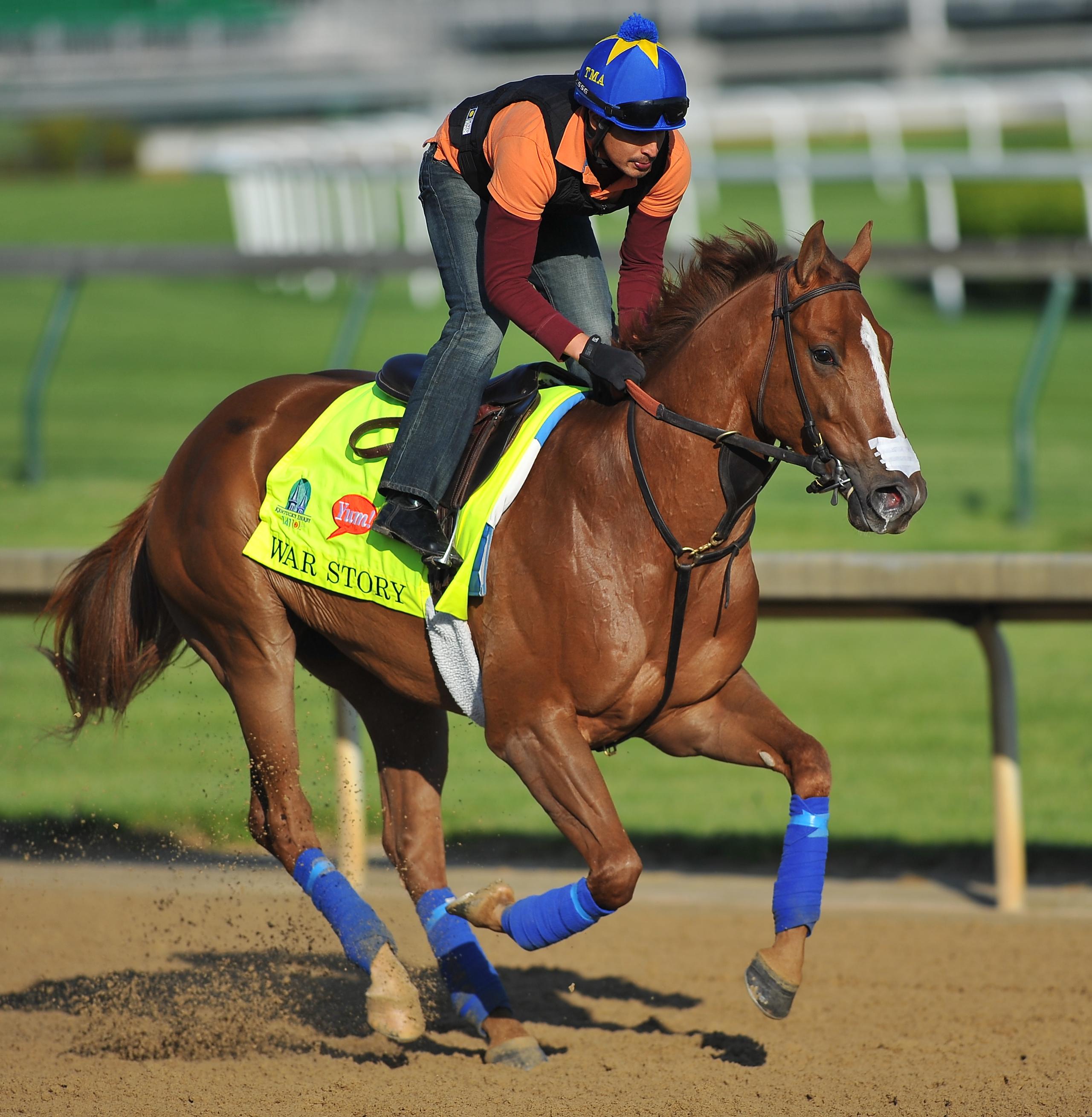 Notable achievements and interesting facts: The only returning runner from last year’s Pegasus World Cup, War Story finished fifth of 12 in 2017. He’s won only once since then — a 2 ½-length victory in the Grade 2, 1 ½-mile Brooklyn Invitational Stakes — but earned a career-best 124 Equibase Speed Figure in his most recent start when fourth by four lengths in the 2017 Breeders’ Cup Classic. Unplaced in nine attempts in Grade 1 races, it would be tough to endorse War Story as a win candidate. A top-three finish probably is his ceiling for the Pegasus. 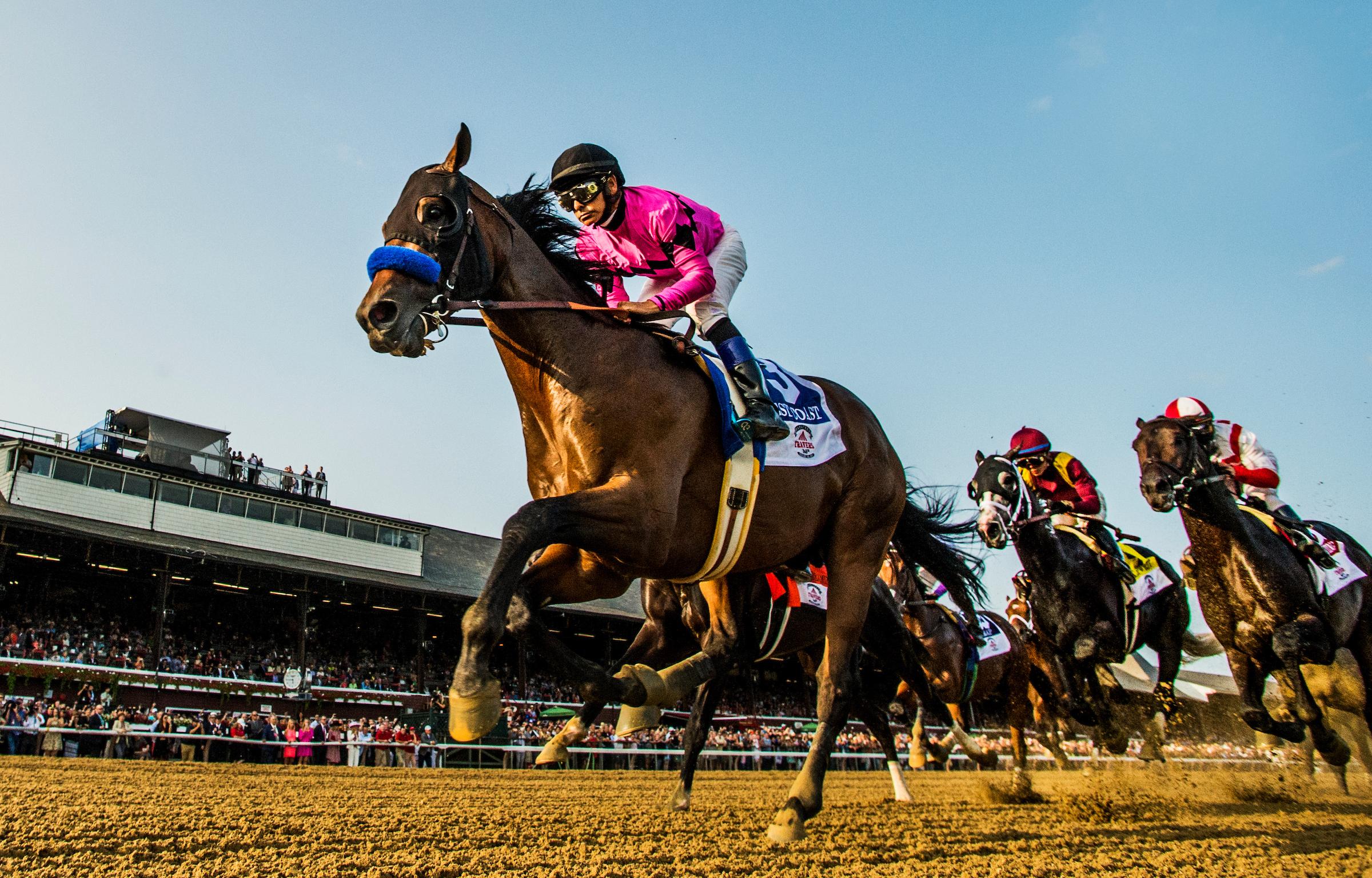 Notable achievements and interesting facts: A finalist and the favorite for the Eclipse Award as 2017 champion 3-year-old male, West Coast won six of nine starts last year in his first season of racing. He followed up his 3 ¼-length domination of the Grade 1 Travers Stakes Presented by NYRA Bets with a tour de force 7 ¼-length romp in the Grade 1 Pennsylvania Derby. Coming off a third-place finish in the Breeders’ Cup Classic that earned him a career-best 125 Equibase Speed Figure, West Coast must be viewed as a key player in this race and a threat to win. He’s eligible to improve as a 4-year-old who was one of the youngest of his crop (born in May) and he’s in the capable hands of Hall of Fame trainer Bob Baffert, who won this race a year ago with Arrogate, another talented 4-year-old coming off a champion 3-year-old male campaign.

Notable achievements and interesting facts: Like a few others, Game Over will face a class test in the Pegasus. He last raced in the Grade 1 Pennsylvania Derby; however, that race was restricted to 3-year-olds and he ran a well-beaten fourth. With only five lifetime starts, he has plenty of room to improve, and he probably will need to improve his Equibase Speed Figure by about 20 points from the career-best 104 he earned when finishing second in the Grade 3 West Virginia Derby in August to factor here. Don’t get me wrong, this is an exciting, young racehorse with loads of potential, but he’s facing the best of the best and needs to take a big step forward to finish in the top three.

Notable achievements and interesting facts: Giuseppe the Great has a trio of top-three finishes from six tries in graded stakes without a win. He ran second in both the Grade 2 Woody Stephens Stakes and Grade 2 Jim Dandy Stakes and most recently won a 1 1/16-mile allowance race at Gulfstream Park on Dec. 10. He’s never finished outside the top three in three races at Gulfstream, but he’s also never faced competition at the level of the Pegasus World Cup lineup. Giuseppe the Great is wading into deep, rough waters here.