On the biggest racetrack in the biggest city lies the eyes of the horseracing world early Saturday evening when the biggest of thoroughbreds, Justify, goes for horseracing’s biggest accolade. After a thirty-seven year drought of Triple Crown coronations, here comes another bid only four Junes after American Pharoah attained the pinnacle over all other living thoroughbreds. American Pharoah proved to a new generation that Triple Crown greatness is attainable after thirteen turned back attempts back to 1978.

And Justify may have the best chance of any of the others, even Pharoah subject to how horseplayers and fans go to the window. He comes into the Belmont with an aura of distributing fear instead of absorbing it to those wanting to make him earn it. The Belmont Stakes field of ten will make it difficult to narrow the wagering enough to set the odds record but here are some others led by Count Fleet who was 1-20 when he won the Triple Crown. Other absolute locks include Secretariat at 1-10, Nashua 3-20, Citation and Spectacular Bid at 1-5, Big Brown 3-10, and three that were 2-5 consisting of Alsab (1942), Seattle Slew and Smarty Jones.

Seattle Slew was undefeated when his won the Triple Crown in 1977 after winning nine races. He would race eight more times after the Belmont Stakes beginning with the Swaps Stakes at Hollywood Park three weeks afterwards where he lost for the first time. Secretariat raced six more times before being retired, never racing as a 4-year old. Citation’s Triple Crown was part of a 16-race winning streak that included a win in the Jersey Derby run in between the Preakness and Belmont Stakes. After not running in 1949 due to an injury he would finally lose a race in 1950, one of his 25 races after the Triple Crown. Don’t expect the same for Justify with a win.

Justify’s bid for the Triple Crown may appear casual coming off three years of American Pharoah’s triumph, similar to the undefeated appearance of Seattle Slew four years after mighty Secretariat. In the current golden era in which racing appears to be, an era of California Chrome, Arrogate, Gun Runner, and American Pharoah, this sudden strong opportunity for another Triple Crown out of an exceptional three-year old crop may seem casual. Perhaps the way to view it is that it would also be the second sweep in forty years, far from frequent. 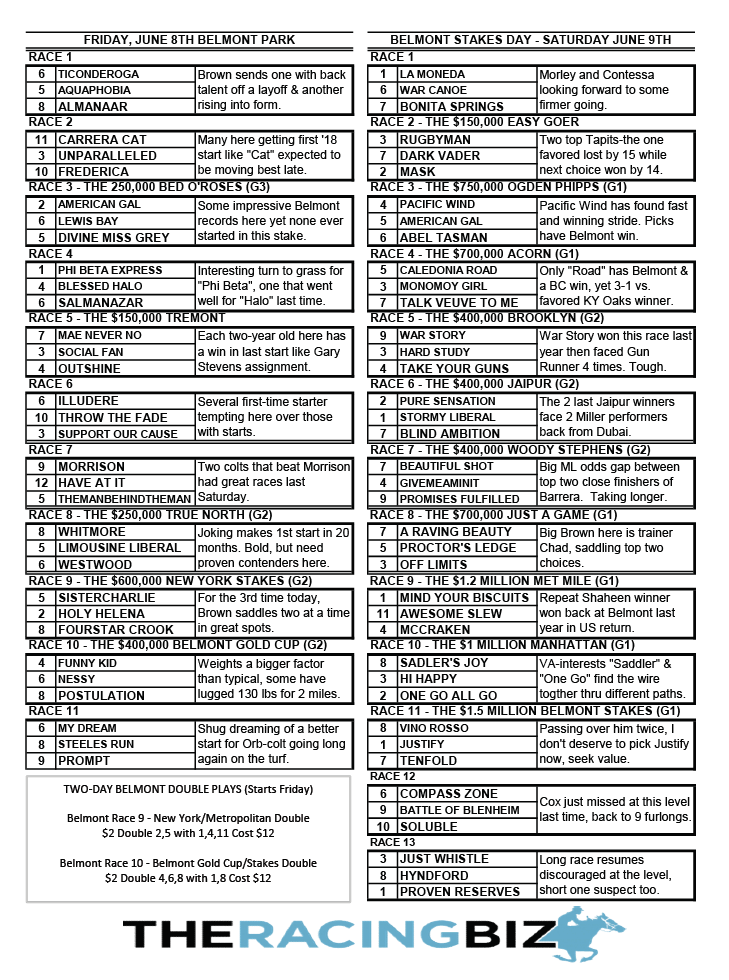 After a big win in the Kentucky Derby and Preakness, Justify will go for the Triple Crown this Saturday in the Belmont. Advance betting is available at the four Virginia OTBs beginning Friday June 8th at 11 AM and continue until 11 PM that night. Day of wagering will be available again June 9th beginning at 11 AM and continue until post time of 6:37 PM. The 4 OTBs are located in Richmond (Ponies & Pints), Henrico (Breakers Sports Grille), Chesapeake (Buckets Bar & Grill) and Collinsville (just outside of Martinsville). Virginia residents can also wager via four on line providers — TVG.com, XpressBet.com, TwinSpires.com and NYRABets.com