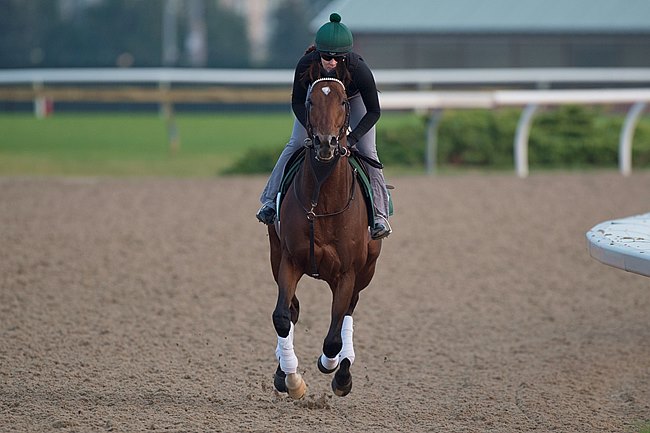 Long On Value gallops at Woodbine

The longevity of Long On Value can be attributed in part to Hall of Fame trainer Bill Mott, who guided the son of Value Plus through his transition from dirt to turf and managed 27 of his 31 starts, including victories in the 2014 Twilight Derby (G2T) and 2015 Canadian Turf Stakes (G3T).

But credit for the 7-year-old’s resurgence this season must go to Brad Cox, who sent his new contender out to a sharp score June 2 in his first start of the year—the $75,000 Mighty Beau Overnight Stakes going five furlongs on the turf at Churchill Downs—and has Long On Value primed for a return to top company in the $250,000 Highlander Stakes (G1T) June 30 at Woodbine.

Cox sent out Green Mask to win the 2017 Highlander, a Breeders’ Cup Challenge “Win and You’re In” event for the Breeders’ Cup Turf Sprint (G1T), but the son of Mizzen Mast  suffered a career-ending injury before he could make the Breeders’ Cup at Del Mar. Around that time, Long On Value entered the ring at the Keeneland November Breeding Stock Sale, unraced since a troubled third in the 2017 Ricoh Woodbine Mile Stakes (G1T) for Wachtel Stable, George Kerr, and Gary Barber. He brought $100,000 from Cox on behalf of new owners Madaket Stables, Ten Strike Racing, and Steve Laymon, and was given plenty of time until his debut this month.

“We liked the horse; we knew he had some back class,” Cox said. “Obviously, he’s accomplished a lot and he’s versatile, anywhere from five-eighths of a mile to one mile. We thought we’d basically give him the winter off, because there’s not a lot of options out there as far as races for those type of horses, and we’d start him back in the spring.”

Long On Value trailed the field early in the Mighty Beau but put in a strong rally and drew off by 1 3/4 lengths for his first win since the 2016 Lucky Coin Stakes at Saratoga Race Course.

“He was training extremely well,” Cox said. “Honestly, we expected a big effort from him, off the layoff, and he gave it to us. He came out of that race in outstanding shape, and he’s had two really nice breezes at Churchill. I know he ran really well in the Woodbine Mile, and we’re hoping he takes to the course again. He’s ready for a big effort, and he’s going to need one in order to win a grade 1.”

Long On Value began his career with a three-race win streak and was purchased by Wachtel and Kerr with grand ambitions, but after sixths in the 2013 Hopeful Stakes (G1) and Foxwoods Champagne Stakes (G1) and a fourth in the 2014 Hutcheson Stakes (G3), found his greatest success on the lawn.

Coming into the six-furlong Highlander off a grade 2 effort is Live Oak Plantation’s homebred Holding Gold, a 5-year-old gelding who has kept elite company on the grass for trainer Mark Casse.

A closing sort, Holding Gold has been compromised by difficult trips and comes into the Highlander off a wide, fourth-place finish in the six-furlong Jaipur Invitational Stakes (G2T) at Belmont Park.

“He ran well at Belmont,” Casse said. “Three-quarters is a little short for him, when we run him on a short-turn course. I’m hoping that the three-quarters on Woodbine’s turf course will be perfect for him.”

Team Valor International and Gary Barber’s Belvoir Bay, invading from California, is riding the crest of a three-race win streak on Santa Anita Park‘s 6 1/2-furlong Hillside turf course. Trained by Peter Miller, the Equiano mare defeated males April 29 in the San Simeon Stakes (G3T) and was back with her own division when she captured the Monrovia Stakes (G2T) in her last start May 28.

Corinthia Knight, a 3-year-old Irish-bred based in Lambourn, England, adds international intrigue. After rattling off four straight wins on synthetic surfaces to begin his current campaign, Corinthia Knight crossed the channel for the second time but wound up ninth as the choice in the Prix Texanita (G3) at about 5 1/2 furlongs on the turf.

“France was a bit of a disaster,” said Archie Watson, who conditions Corinthia Knight and owns him along with Ontoawinner. “We took him over and the ground was slated to be good to firm, but they watered and it was quite sticky ground, really. He obviously has very good form on the all-weather, but on the turf, he wants it firm.

“He’s won a fair amount of prize money this year, but obviously a ‘Win And You’re In’ would be great and help get us to Churchill,” continued Watson. “He has won on a straight track and won over a straight five (furlongs) at Newcastle, but he does really love running off a bend, so these North American races suit him very well.”

Woodbine Entertainment will offer a $15,000 reward to the owner and $10,000 to the trainer of the horse who accumulates the most points in a new three-race turf sprint series that launches with the Highlander, with points awarded on a scale of 10-7-5-3-2 for the top five finishers and 1 for all other participants. The $175,000 Play the King Stakes (G2T) Aug. 25 at the Toronto oval and the $250,000 Nearctic Stakes (G2T) Oct. 13 are the other events.

This piece appeared on Bloodhorse.com was written by Claire Crosby. Long On Value was bred by Snow Lantern Thoroughbreds and has 8 wins, 5 runner-ups and 5 thirds from 31 career starts.