The following appeared  in the Daily Racing Form and was written by Matt Hegarty.

In 2013, Colonial Downs, Virginia’s only Thoroughbred track, went out with a whimper.

Buoyed by new ownership and the prospect of tens of millions of dollars of annual revenue from an exclusive license to operate devices similar to slot machines in the state, the track is planning to hold 15 days of live racing next fall, with the potential to offer as much as $500,000 a day in purses. The next year, the track is planning a 30-day meet stretched over 10 weeks in the fall, with purses of $600,000 a day, which would place Colonial among the top tier of tracks in the U.S. by purse distribution.

“I think it’s fair to say that ownership has been very bullish about this project of revitalizing horseracing in Virginia,” said John Marshall, a veteran racing executive who has been installed as general manager of the track by the partnership that purchased Colonial earlier this year.

The plans for the track and its gambling parlors are a stark turnaround from six years ago, when the track’s previous owner, Jacobs Entertainment, surrendered its operating license after its deteriorating relationship with the state’s horsemen cost the track an agreement over live racing dates. Colonial Downs has not held a live race since then. 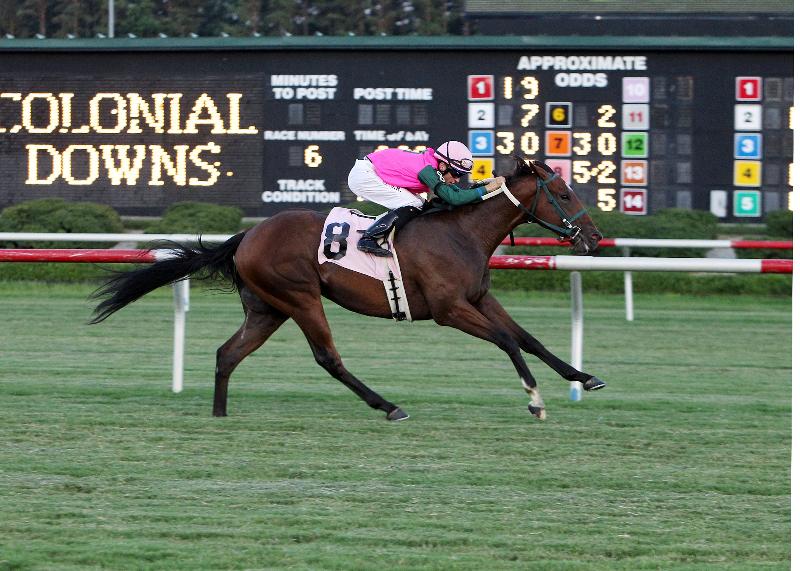 But earlier this year, the Virginia legislature passed a bill allowing the new owners to operate historical horseracing machines, devices similar to slot machines that use the results of previously run races to determine payouts to winners. Under rules approved by the racing commission, Colonial’s owners will be able to operate a maximum of 3,000 machines at Colonial and as many as 10 off-track betting facilities, a lucrative license for a state whose neighbors that have limited gambling options.

The first machines are expected to be operational in mid-April, when the track’s owners debut 600 of them at Colonial Downs, located in sparsely populated New Kent County. But three other gambling parlors are expected to open throughout the year, according to Marshall, in three of the state’s most populous areas: Richmond, Hampton, and Chesapeake, each with 700 machines.

“We’re optimistic – I hope not too optimistic – about historical horseracing,” said Frank Petramalo, the executive director of the Virginia Horsemen’s Benevolent and Protective Association. “Those are big population centers, and we expect them to do very well.”

During Colonial’s dormancy, four off-track betting parlors continued to operate, owned by a consortium of horsemen’s groups that banded together under the name of the Virginia Equine Alliance. Those four locations are being surrendered to Colonial’s new owners next year, which is rebranding all of the off-site gambling parlors as Rosie’s, Marshall said.

Because of those off-track betting operations and revenue built up through account-wagering in the state over the past five years, horsemen have a rich pool of money to draw on for the track’s first meet, according to Petramalo. Virginia has one of the most generous laws on the books in regard to guaranteed revenue to horsemen from account-wagering, with all bets in the state requiring a 5 percent source-market fee. In 2018 alone, account-wagering revenues to horsemen are expected to total $3.5 million, Petramalo said.

“We have a good bit of flexibility for the first couple of meets,” Petramalo said.

The plans for 2019 would have Colonial race 15 dates over a stretch of five weeks from August to September, running on a Thursday-through-Saturday schedule. Both Marshall and Petramalo said that the track’s turf course, which received high grades throughout its history, would be the focus of the live racing cards. The track plans to run as many as 90 percent of the races on grass, a strategy that would seem to position the track well in an era when turf racing generates the biggest fields in U.S. racing.

The meet would be expanded in 2020 to 30 dates stretched over 10 weeks, but that’s when things may get a little tricky. Petramalo said the ideal dates for the meet would run from early September to late October, but officials also said that they need to reach out to their racing counterparts in Maryland to reach an agreement that avoids any toe-stepping.

“We’re going to have to come to some sort of arrangement in the Mid-Atlantic, to at the very least coordinate the types of races we are going to put on,” Petramalo said.