Virginia’s oldest steeplechase is set to kick off Easter Weekend on Saturday April 20th and tickets are still available. 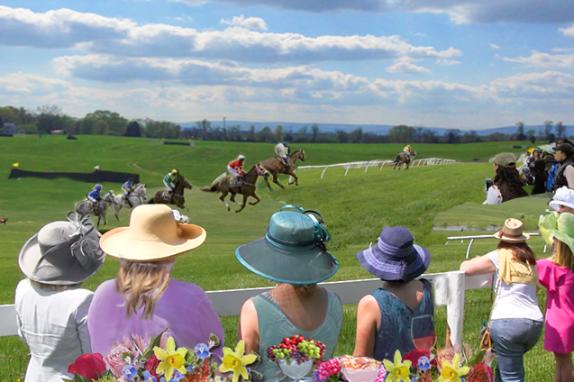 Only General Admission tickets will be sold on Race day. All other tickets can be purchased now through April 19th.

Here’s a history of the Middleburg Spring Races:

Today — Thousands come to see some of the nation’s most athletic thoroughbreds compete at high speeds over hedges and timber. The prestige of $190,000 in purse money brings the finest horses together for seven thrilling races.

A great coup for the Middleburg Spring Races was securing the Temple Gwathmey, a race originally run in Rolling Rock, Pa. and then in Belmont, NY. This $75,000 graded stakes hurdle has been held at Glenwood Park since 1990, and it lures the best hurdle horses in the country.

Our famous Alfred Hunt Steeplechase course is inspired by fences found at New Zealand and French race meets and boasts every type fence: ditches, banks, brush, timber, and coops, for a fanciful course designed by Mr. Paul Fout and Mr. Tommy Beach. Mr. Alfred Hunt was a stellar Master of the Rolling Rock Hunt, and this one-of-a-kind American racecourse is dedicated in his memory.

A Sporting Tradition — Every third Saturday in April, as a much-anticipated rite of spring, thousands of guests and race fans gather at Glenwood Park for Virginia’s oldest steeplechase. Steeped in tradition, it’s rich history dates back to the 1911 when Middleburg Hunt’s Master of Fox Hounds, Daniel Cox Sands, organized the first Middleburg Hunt Race Meet.

With its origins of foxhunting point-to-points, the Middleburg Spring Races has evolved into a world-class race event that resonates with a vast audience from Middleburg locals to the world’s elite race aficionados.

The Middleburg Spring Races have become the quintessential event to welcome spring to Virginia, synonymous with the blooming of the daffodils and dogwoods. Surrounded by Virginia’s famous hunt country, the tradition continues.

The VEA is regulated by the Virginia Racing Commission
©Copyright 2021, Virginia Equine Alliance